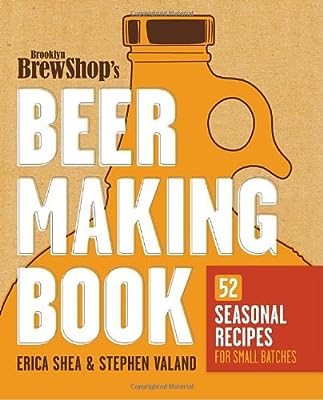 Price: $19.99
As of 2020-02-15 15:58:32 UTC (more info)
Product prices and availability are accurate as of 2020-02-15 15:58:32 UTC and are subject to change. Any price and availability information displayed on http://www.amazon.com/ at the time of purchase will apply to the purchase of this product.
Availability: Not Available - stock arriving soon
Product Information (more info)
CERTAIN CONTENT THAT APPEARS ON THIS SITE COMES FROM AMAZON SERVICES LLC. THIS CONTENT IS PROVIDED 'AS IS' AND IS SUBJECT TO CHANGE OR REMOVAL AT ANY TIME.

Brooklyn Brew Shop’s Beer Making Book takes brewing out of the basement and into the kitchen. Erica Shea and Stephen Valand show that with a little space, a few tools, and the same ingredients breweries use, you too can make delicious craft beer right on your stovetop.

Brooklyn Brew Shop’s Beer Making Book offers a new approach to artisanal brewing and is a must-own for beer lovers, seasonally minded cooks, and anyone who gets a kick out of saying “I made this!”

By Erica Shea and Stephen Valand Paperback Brooklyn Brew Shop; made in the USA

On Beer and Brewing Techniques in Ancien...